Applying for a School Place

For advice and information about applying in year applications please use this link. 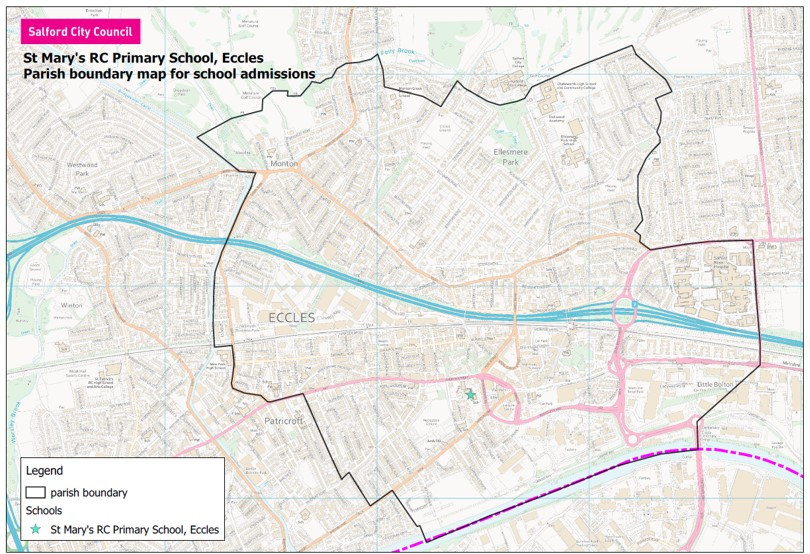 St Mary’s is a Catholic Primary School under the trusteeship of the Diocese of Salford. It is maintained by Salford Authority. As a Voluntary Aided School, the Governing Body is the Admissions Authority and is responsible for taking decisions on applications for admissions. The co-ordination of admissions arrangements is undertaken by the Local Authority.

For the school year commencing September 2023, the Governing Body has set its admissions number at 30 for both the Nursery and the Reception classes.

The school’s role is to participate in the mission of the Catholic Church by providing a curriculum, including Catholic religious education and worship, which will help children to grow in their understanding of the Good News and in the practice of their faith.  The school will help the children develop fully as human beings and prepare them to undertake their responsibilities as Catholics in society.  The school requires all parents applying for a place here to understand and respect this ethos and its importance to the school community.  This does not affect the rights of parents who are not of the Catholic faith to apply for a place here.

Admissions to the school will be determined by the governing board. All preferences listed on the Local Authority Preference Form will be considered on an equal basis. Where the school receives more applications than places available, the following oversubscription criteria will be applied, once places have first been allocated to children who have an education, health and care plan which names the school.

There are no waiting lists for in-year admissions.

Parents wishing to take either of the above options should inform the Head teacher of the school as soon as a place is offered so that the appropriate arrangements can be made.

Parents may seek a place for their child outside of their normal age group, for example if the child is gifted and talented or has experienced problems such as ill health. Parents should contact the Head teacher of the school in the first instance to discuss an application for admission outside of the normal age group.

In addition, parents of children born between 1 April and 31 August (summer born children) may choose not to send that child to school until the September following their fifth birthday and may request that they are admitted out of their normal age group – to reception rather than year 1 i.e. starting reception a year later than those in their age group. This request should be made to the school admissions team in writing giving reasons for the request.  This should be done at the time the child would usually be expected to apply for a reception place.

The request will be considered in conjunction with the school and the parent, and the admission authority for the school will decide on whether the child should be offered delayed admission or not.  The decision, and the reasons for it, will be communicated to the parent in writing.  Where a child is offered a place at the school but not in the year group preferred there will be no right of appeal.